The WordLair – questions worth asking

In search of answers – please help!

The equivalent of 3 Boing 747 crashes every week

There’s this thing I don’t get. No this isn’t a rhetoric ploy, joke or an attempt to be cute. But why is it that we are shocked and upset when the news fill up with another airplane crash or two more soldiers killed in action? Of course any premature death of one of us is saddening – upsetting even. To the loved ones still alive it is evidently devastating. But when I bring up the fact that the equivalent of two full intercontinental passenger aircraft are killed every week on the road in car accidents, I’m most often met with incredulence. Then I’m told it is an irrelevant comparison. That I’m talking gibberish. Trying to compare apples with oranges.

Is it? Am I? If so, I’d like to have someone go real slow on the explanation to me, please. Allow me to make some observations: In 2009 (full stats for 2010 not yet available to me) the world registered 1,103 deaths in airplane transport. This includes airplanes from eight passengers and up. That same year we had 33,808 deaths on the roads – in the US only! Forget India, Nairobi or France. That’s 75 Boing 747 planes! They can’t make new planes that fast. 75!? – that’s six full planes per month.

None of us swing out of the driveway in the morning contemplating whether we’ll make it to work or meet the grim reaper. But neither do any of the millions of passengers on planes. Why is it that the small – but numerous – accidents that kill many times more than any of the big airplane crashes, have near zero effect on us. But the crashes do? Oh and did I mention that the road accidents hide a much larger story: The survivors. They are for the most part hurt and will carry scars and handicaps for the rest of their lives. The plane crash usually don’t boost the sales figures of the wheel chair industry. Why do we accept it? Somehow it reminds me of the often quoted tale of how lobsters, in a slowly heating pot, never see what’s coming. (which, by the way, is a false tale: see this)

Statistics being what they are, you’ll be forgiven for thinking I’ve carefully picked a year that would feature well with my point. But I’m afraid that I haven’t. Here’s the table of the ten years between 1999 and 2009: 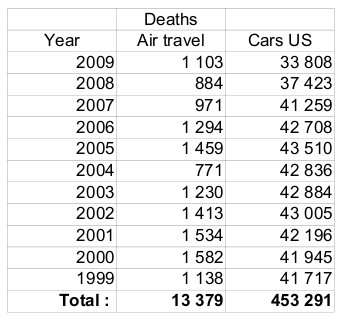 Note how 2009 is the best year yet for road accidents. But what is really scary is that over a ten year period we manage to kill almost half a million of our fellow citizens. And six times that number are injured. Many to a degree where their life is changed for the worse. Permanently. In comparison, ten years of armed conflict in Afghanistan has cost 2544 deaths – for all coalition partners combined (2001-2011).

Perhaps you think it is unfair to put the entire US road traffic up against world wide air travel? OK – here’s the same table but compared with France:

But there are differences in the two transport systems that makes them incomparable, you say. For one there ain’t much up there. No crossing pedestrians, no stray balls from the playground. And not much in oncoming traffic either. It’s all smooth cruising on a freeway. Compare with deaths on the interstates.

To begin with, I’m sure there’s a couple of air traffic controllers out of O’Hara who’d like to pitch a remark or two on there not being much congestion up there. Congestions at hundreds of miles an hour they’ll tell you. And as for “stray balls” they have a fine collection of tales involving single-engine Cessna’s happily strolling into landing and take-off corridors. According to “FARS” (the fatality analysis reporting system of NHTSA) almost 20% of all fatalities occurred on roads with speed limit of 60 mph or higher. If we can assume that that means controlled access roads with traffic in one direction only (no crossings etc) then we should be comparing (for 2009) 20% of 33,000 = 6,600 deaths with the 1,103 deaths of world wide air traffic. Sounds good? In the US we only kill six times as many people, on the safest type of road we have yet made, than world wide air traffic does. Including traffic by all the black listed companies, of which there are currently 285.
See this

Imagine you turned on the news every day and the lead story ran like this: “Today, another Airbus A320 crashed. But unlike yesterday where 124 lives were lost, today only 110 passengers and crew died. A Bingo Air spokesman said they’d try to fly with greater care going forward. And now for the weather forecast….”

Every day! Xmas and the 4th of July included.

Most of us know all this – at least in broad terms. But we are not getting the least agitated. Are we like lobsters slowly warming up to ever higher degrees of indifference. Is our apparent high tolerance on just how violently we can live together having a broader impact on our behavior? And are we all stone hard hypocrites when we show affect over the latest plane crash? Or yesterday’s four casualties to a roadside bomb outside Kabul?

As I said, I don’t get it. Either we should focus and do something serious about that daily carnage taking place on our roads or we should carry on with the low-budget approach we have had for decades (there are improvements to be sure. Incremental improvements that is). But in that case please don’t put on a display of emotions when the next plane meets mother earth a bit too enthusiastically.

Interesting stats (and these guys should know: Their business depends on it) on the odds of dying: In any one year in the US you are 1:6856 against getting killed in a road accident. In your lifetime you have no better than 1:88 against. Travel by air and your odds are 1:547801 and 1:7032 respectively.